When most people think of coffee, they mean espresso. This drink is characterized by strength, potency, intensity, and richness among other things. No wonder coffee drinkers from all over the world like to order it when they get to hang out with friends and family or during meetings of any kind.

Due to all the lattes, cappuccinos and other types of coffee drinks, some may say that espresso is less popular. However, the situation is quite different. In fact, the espresso is living its reinvented life during the last ten years as baristas and coffee enthusiasts find new ways to make it more captivating and modern.

Without further ado, it’s time to introduce yourself to the espresso, its history and specifications as well as preparation and more. Read carefully and take some notes!

The Basics Of Espresso:

Before we get to what espresso actually represents, it’s useful to debunk some popular myths that surround this drink. Despite the fact that some labels may indicate that you buy espresso beans, espresso isn’t a coffee bean. Any coffee bean can turn into an espresso. What’s more, espresso isn’t some special style of roasting the beans.

Instead, it’s a way of brewing the coffee. Let us expand on that a bit. When you let hot water go through fine coffee grounds with immense pressure, then you get a shot of espresso. Some cups can contain one or two ounces of espresso, but if the drink is prepared this way, then you’re talking about espresso.

Having said that, special espresso machines exist to produce this kind of drink. One of the reasons is because you need approximately from seven to ten atmospheres of pressure among other characteristics. But more on that, later.

Besides the rise of machines and transportation, the nineteenth century was huge for espresso and cafes, too. The first coffee-making machine, which ran on steam, appeared in this period.

Furthermore, when someone mentions espresso, usually the first country that pops into mind is Italy. That may happen because the first espresso-making machine that produced one shot of espresso at a time was developed in Milan by two beverage experts. It’s a pretty weak one when compared to the new models we use nowadays, but it was revolutionary at the time.

After that, the technology grew even more. And the dominance of cafes, espressos, and coffee drinks spread all around Europe until it reached the whole planet.

If you’re interested in making your shots of espresso from the comfort of your home, you can do that. Although it may not seem very easy at first, you’ll ace it slowly over time if you’re patient enough and if you practice. Moreover, you’ll have to learn a couple of new skills related to home brewing espresso and dedicate a small portion of your time to acquire these skills.

On the other hand, it’s worth mentioning here that not everyone is for brewing espresso at home. Furthermore, some individuals don’t have the time, aren’t really interested in learning new stuff, and are perfectly satisfied with a good coffee that isn’t espresso.

That’s why before making up your mind, you should determine which category of people describes you more.

The first espresso-making machines we talked about before, were powered by steam as that was the state-of-the-art tech at the moment. It works thanks to the accumulated steam which pushes water through the grounds of coffee. However, the force wasn’t as strong as it was needed and these machines are considered a lower class when compared to pump-powered ones.

The espresso machines that operate with pumps are much more contemporary. Consistency, as well as high performance, are some of the characteristics that define them. What’s more, the pumps use water that’s stored in a reservoir and push it to the grounds.

When it comes to automatic machines, the users don’t have to do anything or think about anything. They just get the end product, which in this case is the espresso.

For more independent espresso-lovers, there is a semi-automatic version. With that being said, the user can set his/her grinding settings and dosage.

A couple of parts in the espresso machine are crucial for the quality of the espresso. We’ll briefly list them here and discuss their features.

Recapping the World of Espresso

Espresso is one of those drinks that has now risen to cult status among coffee beverages. For some, the first thing that comes to mind is a bitter, almost acid-like, and strong taste.

However, thanks to the right espresso-making technique, that changes. If you do everything right, you’ll get a complex taste that’s sweet and soft. To achieve that, people should be willing enough to take some time and study the whole procedure of making a quality shot of espresso and obtain new skills. Let’s not forget the appropriate equipment that people should invest in to get that satisfying end product.

Now over to you! Are you a great fan of espresso? Do you already or would like to make your espresso? Tell us all about that! 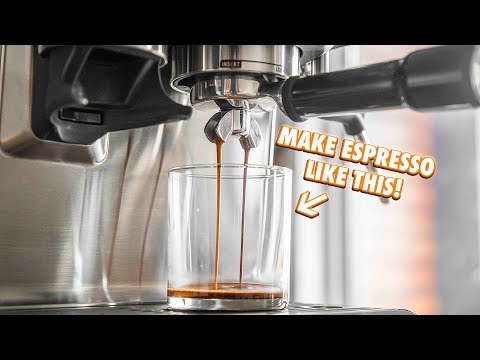 This is an example of a text widget which can be used to describe a particular service. You can also use other widgets in this location.

Examples of widgets that can be placed here in the footer are a calendar, latest tweets, recent comments, recent posts, search form, tag cloud or more.